Geneva, April 6 2017 – Spain, France and Germany continue to top the travel and tourism rankings in the World Economic Forum’s Travel and Tourism Competitiveness Report 2017, released today, but Asia steals the show as the region’s largest economies show the greatest rise in tourism-friendliness. The report ranks 136 countries across 14 separate dimensions, revealing how well countries could deliver sustainable economic and societal benefits through their travel and tourism sector.

Apart from the ranking, the report also shows how the industry is a force for good in an otherwise largely stagnant global economy. The global travel and tourism sector accounts for 10% of global GDP, grows faster than other sectors and provides one in 10 jobs. Underpinning this growth is the increasing accessibility and affordability of travel, although environmental challenges remain and many countries underperform in making technological strides.

The top three in the ranking – Spain, France and Germany – have secured their position thanks to world-class natural and cultural resources, outstanding infrastructure and hospitality services. Traditional strong travel and tourism destinations, including Japan (fourth), the United Kingdom (fifth), the United States (sixth, down two places), Australia (seventh), Italy (eighth), Canada (ninth) and Switzerland (10th), have also made it in the top 10. Switzerland, however, made a steep fall from sixth to 10th place, while Japan (fourth, up five) gained most places. 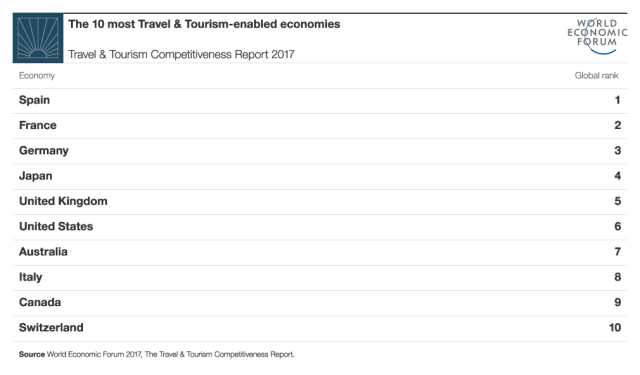 While advanced economies still hold the top spots in the ranking, 12 of the top 15 most improved countries are emerging markets, with Asia’s as exponents. Asia’s largest markets are not only becoming larger source markets but also more attractive destinations. Almost all of the region’s countries improved their ranking. Except for Japan, Hong Kong (11th, up two), China (15th, up two), Republic of Korea (19th, up 10) and Malaysia (26th) also made it to the top 30, while India made the largest leap in the top 50 (up 12 places) to land in 40th place.

“The rise of Asia’s giants shows that the Asian Tourism Century is becoming a reality,” said Tiffany Misrahi, Community Lead of the Aviation, Travel and Tourism Industries, World Economic Forum. “To reach their potential, the majority of countries still have more to do, from enhancing security, promoting their cultural heritage, building their infrastructure and creating stronger visa policies.” 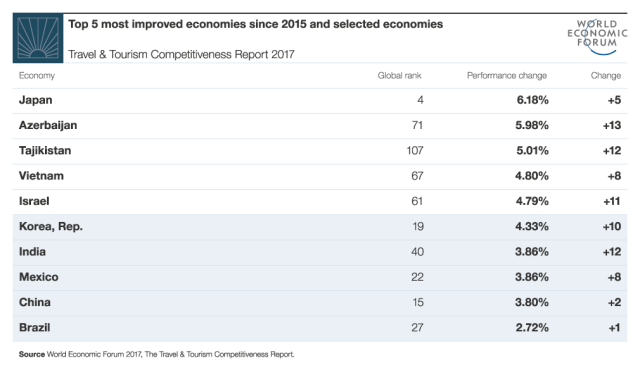 The Travel and Tourism Competitiveness Report 2017 finds that the increasingly protectionist global context, one that is hindering global trade, is not holding back international travel. Travel and tourism’s resilience is clear as the industry continues to build bridges between people and stronger visa policies are being developed to enhance security while facilitating travel. In light of the Fourth Industrial Revolution, evidence suggests that, connectivity has increasingly become a must-have for countries as they develop their digital strategy.

“The increasing importance of demand from emerging markets and technology are changing the travel and tourism sector’s landscape at a fast rate,” said Roberto Crotti, Economist, World Economic Forum. “The capacity of countries to respond to and embrace these structural shifts will determine the future success of destinations.”

The report contains detailed country profiles for the 136 economies featured in the study, including a comprehensive summary of their overall positions in the index and a guide to the most prominent travel and tourism competitive advantages and disadvantages of each. Also included is an extensive section of data tables that cover each indicator used in the index’s computation.

The World Economic Forum produced the report in collaboration with its data partners Bloom Consulting, Deloitte, the International Air Transport Association (IATA), the International Union for Conservation of Nature (IUCN), the UNWTO and the World Travel & Tourism Council (WTTC).

The launch of the report will happen today live from Buenos Aires at 12:15 PM EST. More than 1,000 participants are taking part in the 12th World Economic Forum on Latin America in Buenos Aires, Argentina from 5 to 7 April 2017. The theme of the meeting is “Fostering Development and Entrepreneurship in the Fourth Industrial Revolution”.